I like commercials. Oh sure, given the option, I still fast forward through them, but a lot of times I can’t because I’m streaming shows or sporting events (go sports team, score the points!). And when the same commercials aren’t repeated ad nauseum (I’m looking at you ESPN app. And Fox… and Comedy Central… and really every single network app.), I’m usually interested in them. That’s because commercials are short stories. Some are more successful than others at connecting with the audience, others fall flat, and others make me question what the company was thinking. It shows how important it is to think through your marketing for any possible glaring errors.

Excuse me, you’re blocking my view…

Take a look at Google’s ad for their new phone, Pixel. It’s creative, well shot, and grabs your interest. However, at least for me, there is something that really bothers me about this ad. The white Google search bar that morphs into a cell phone shape blocks a good portion of the screen. Of course that is the point of the ad, but I’m absolutely sure it didn’t bring to my mind what Google wanted it to.

To me, the white bar is a nuisance. It gets in the way of all these great experiences that we are shown. Ironically, I read this as an anti-mobile device ad. It says the devices that people hold in front of their faces all day are blocking the interesting events of life. They get in the way of what’s going on. I’m missing out on life if I’m staring at my cell phone or tablet.

Oh sorry, let me fix that for you…

Part of me thinks that Google realized that maybe their ad was being read that way because a little while later, they released this second ad for Pixel that was the exact opposite of the first. Now, the search bar that morphs into a cell phone shape is the only window through which the audience sees any images.

Again, I don’t think this had the effect on me that Google wanted it to. I also read this ad as anti-mobile device, but this time it was because I felt that I was missing out on so much more that I couldn’t see because I was limited to just a fraction of the entire screen. It made me think of all the people who live their lives limited by what they see through their mobile devices. It conjured up this image: 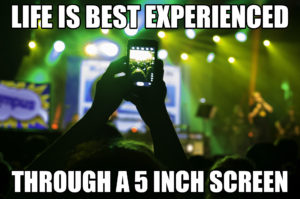 (You’re living the moment right now! Don’t miss it so you can pull it up and “relive” the moment later! Except with cruddy sounds and nowhere near what the actual experience was like.)

The problem isn’t whether the search bar should block the view or be a window. It’s that in either scenario, our view is limited by the very device that is advertised.

Maybe I’m just an old fuddy-duddy though. Well, while that may be true, I know that there are others like me out there. And that’s why you have to be careful when you are creating marketing material, whether it’s commercials, pamphlets or emails. You have to do your best to make sure your message is going to come across the right way to as many people as possible so your message will stick with as many people as possible.

Before you start putting money into a campaign, make sure it’s tight. Send it through various people, get thoughts and opinions. Get people’s reactions and insights. While I’m not advocating marketing material that will appeal to every possible person (let’s face it, that’s impossible. And design-by-committee never turns out the way anyone wants), I am advocating getting critiques from trusted individuals. Or you can hire someone to do it for you. That’s easiest. That way you can kick back and watch all the commercials you want.

The 5 W’s of Running Robot